Some weeks ago, I was talking with friends about what I would tell my younger self (late teens, early 20s). Variations of this meme have been around for awhile, the current iteration is what two words would you tell yourself.

But there wasn't anything specific I could think of.  So many experiences, some painful ones I never want to re-live. But they made me who I am.

So the two words I would tell myself would be focus (on) yourself.  Yes, the on is a third word - but critical. I have always been focused.  But for so long I was concerned about everyone else and what they were doing.  I paid attention to things that were out of my control. 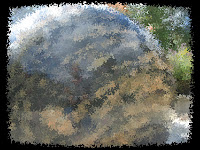 It sounds like more of our narcissistic culture.  But truly, focusing on what I can control has been worth so much more.  I have so much more acceptance and satisfaction with who I am and with life.

Another thing I wish I'd known (now that I'm in my late 30s) is that life gets easier.  Who knew?

Of course some things never get easier (funerals, death) and I suspect they never will.

But getting things done, understanding my expectations, understanding what is likely to happen, routines, I get it now.  I am so much better at this stuff than I was straight out of college.

My body may not look like it did 20 years ago, but I'm coming to a place of acceptance with that.  It helps that I know that the media focuses on that very narrow perceptions of bodies and what they look like.  The majority of us are outside of that curve (the majority of women are not nineteen and a size 2).  While I understand this logically, I have yet to fully accept it emotionally.  And then I think about the standard that men have for attractiveness - men are not judged (as much) for how they look.

For the record, it makes sense that life gets more predictable as one ages. When you've had twenty additional years, those are twenty years to observe life and its patterns.  Life has a way of settling into patterns and routine.

Perhaps this is simply some sort of respite in parenthood between toddlerhood and raising teenagers.  But that's my take.  There are so many perceived negatives about aging, it would have been nice to know that there are some positives.
Posted by Aerin at 7:01 AM