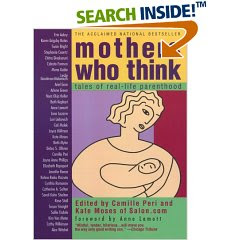 Edited by Camille Peri and Kate Moses of salon.com

This book of essays is highly recommended for anyone willing to read about the good, the bad and the ugly of motherhood. If you are someone who never wants to hear about the challenges of motherhood - this book is not for you. For example, if you are the type of mom (or you believe all moms should be someone) who makes all her/your own clothes and her kids' clothes, makes bread and all meals from scratch, whose kids wear cloth diapers and never watch television, you probably won't appreciate this book.

I keep meaning to send my copy to chanson or my friend who has a two and a half year old son and a 9 month old. I found short essays a good fit because I could pick them up and put them down easily. My friend the north node sent it to me while I was on bed rest. (I was so frazzled on bed rest and so worn out by anything remotely parenting related I didn't pick it up until the babies were six months old. It was still good).

Typically, I'm not someone who thinks comics are the greatest thing since sliced bread. But this

baby blues comic a few weeks ago seemed to sum up my feelings about motherhood.

For me, motherhood has been the toughest job I've ever attempted to do.

And I'm only in the first few minutes of the race.

This book gives the recognition that being a parent is truly a difficult job. It is not an innate knowledge. Many of us have mixed feelings about parenthood - which is not always accepted or a popular perspective.

One poignant essay is by Kate Moses - "I love you both unequally". Obviously, a very contraversial topic - as most parents would like to admit that their heart grows with each child. She talks about how her love for her son is very different from her love for her daughter. She claims that it's a myth to love two people equally - thereby impossible to love both her children equally.

In another of the essays, a mother talks about giving up her daughter for adoption - and how in the end, she was the one who missed out. Not her daughter - who had so many people to love and care for her. One piece describes the close relationship a granddaughter had with her grandmother - when her mother was not able to be a stable influence.

The essays aren't all serious - some are quite amusing. For example, I think I only need to describe the title "No Diapers, No Coffee".

Another essay - Rahna Reiko Rizzuto's "What My Mother Never Told Me" was a humorous perspective of labor. She mentions being converted to drug-free childbirth for the birth of their second child as "...the equivalent of discovering religion in an airport." Some women are able to do the painkiller free childbirth. I have tremendous respect for them. In her essay - during the second or third contraction, she remembered why she had an epidural for the first birth.

I loved being able to pick up the book and put it down at any point. I appreciated the honest, wry point of view of the strong women authors of the essays.

This book is willing to look at motherhood from many angles. I appreciated it as a breath of fresh air.
Posted by Aerin at 9:58 PM

Sounds very interesting. I'll have to look into it. :) Thanks!

Parenting twin toddlers must be one of the hardest parenting challenges out there.

For myself, I feel like parenting has gotten a lot easier since Leo has turned three. Now they're capable of imaginative free play for hours at a stretch with just passive supervision where I'm in the next room in case they start screaming, but I don't have to be right there following them around the room 24/7.

I think the hardest part is the fact of just not being able to take a break at all ever. But now that I have more free time to do my own thing, it's easier to throw myself completely into playing with them when it's play-time.

I'd love to read it! Sounds like me kind of book. And I tell my children all the time I do not love them the same. They are different, and so I love them differently.

And I am SO with cl on the turning 3 thing - it's a whole new world now that I no longer have toddlers.

Thanks FFG! I hope you enjoy it!

Thanks chanson - I have to say - I'm certain parenting triplets or quads would be more difficult. I look forward to 3. We've got to get through 2 first though. My ds has started to throw fits when he doesn't get his way.

The nice thing about twins is that they entertain one another for the most part.

Liseysmom - it was a very interesting essay. More than anything, I appreciated the idea that it's not all cut and dry and different moms feel differently. Talk about contraversial!

While I don't think I love one of my kids more than the other, I'd have to say I don't feel like I love them in the same way, and it's because they are not the same.

Then the kids add their own complexity to the equation. Leo is extremely affectionate which is adorable!!! But he's started inisiting on his own idea of division of love:

Is that normal? Does your book say anything about that?

chanson - I have to safely say, I have no idea. But I think that sounds perfectly normal to me - a developmental stage.

BTW all of the "moves" in the above were meant to be "loves" -- this French keyboard confuses me...