Smiling all the time 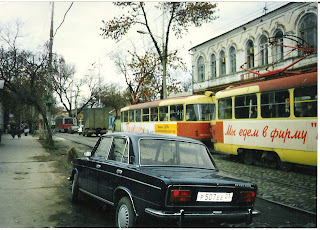 I've mentioned before that I studied in Russia for three months back in the 90s. It was an amazing experience and eye-opening for many reasons.

My host family didn't have a car, and the public transportation was good (if not reliable. So I was able to observe quite a bit.

As college students, we were told that Russians generally thought Americans smiled too much. They told us it seemed that Americans smiled all the time. That in Russian culture, smiles were generally reserved for good friends, for times you were genuinely happy.

One day, I remember seeing a babushka (an older woman) walkng down the street crying, tears rolling down her cheeks. She didn't appear homeless or unkempt. I couldn't tell if she was in physical pain, or perhaps had lost a loved one recently. Perhaps she was thinking about loved ones she had lost during World War II and Stalin's purges. I was only looking out the window from the tram - and we quickly passed. (This is not the woman, this is only a photo of a random woman from that time). 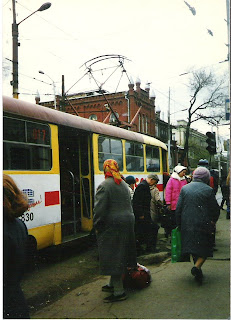 What struck me was the incredible difference in our cultures. I can't imagine a person in American culture walking down the street openly crying (not homeless). And no one noticing. And no one stopping that person to ask if they could help or what was wrong. A person was given their space. And they also didn't have act happy or put on some sort of false face.

Because, let's face it, that was/is a country with separatist regions. Where many people (especially older people) are desperately poor and also probably hungry.

That's not to say that I didn't observe tremendous social pressure in Russia, or kindness and caring. Just that the attitude towards pain and suffering was very different.

It does seem a little ridiculous in our culture that we're supposed to hold it together no matter what. In the pilot of "Six Feet Under", the oldest brother Nate laments the stuffy/hidden nature of most American mourning. If a widow or other relative breaks down during a funeral, they're taken to another room to be comforted. Because that brash, intense display of sorrow might be too much for the family and friends. It wouldn't be dignified.

We are social creatures and creatures of habit. Sometimes it's nice to have someone share a smile, pat you on the back and say "we're here for you". Or "we're thinking/praying for you".

I say, there are some things that it takes time to bounce back from. Some that we'll never get over. I'm not about to tell people how to feel - but I will say - it's okay to mourn. To have a bad day. To have a bad week, month or even year. It's okay to not be perky all the time.

Below are two additional photos I took at the time, the first of a home/business. 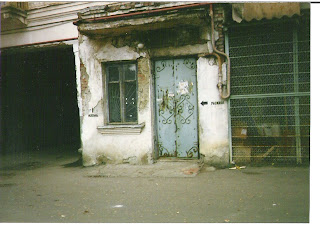 This is some trash that was in the hallway the entire time I studied at the university. Although, I have to say, I just emptied some file folders at my work that had been sitting there for 5 years, with the dust to prove it. So things do have a way of sitting around, no matter which continent you are on. 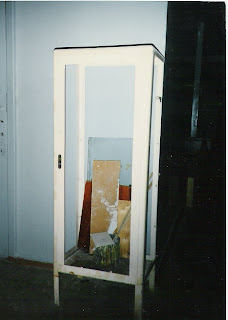 Thanks for this post, it is hard to remember that mourning is an important life, so hard that we (OK, I mean I) often don't know how.
Your time in Russia sounds intriguing.

I was reading a kind of cultural exchange message board topic before, and I read the same things from Russian posters -- Americans smile too much and it's unnerving.

Your account is interesting because it kinda fills in the other side -- although the Russian posters had said that it was more customary for people to give others space (e.g., not notice/stop by to ask random people what they could do to help), but I never got the story that you know...there are people who just walk around crying. Interesting...

I kinda would like a world where people didn't always smile and approach me and pretend to be happy...but I'm not quite sure if I want a world where the negatives of life are so candid.

Very interesting topic. Here, family members (especially mothers) are often given anti-depressants in order to cope. I wonder why we feel the need to keep smiling. Is that part of the American dream?

When I was in the Middle East, I remember being amazed at how well they handle death of even young people. A friend's 19 year old brother was killed in a car accident and while they missed him they were quite happy that he was in heaven (like he was the lucky one). It kind of reminded me of Mormons only more upbeat about it.

Thanks superrelish - That's why I brought it up - we seem to expect people to bounce back from impossible things quickly.

Hi irresistible disgrace - yeah, this was not common by any means, I saw someone openly crying maybe twice in three and a half months. Well, aside from at a funeral. I think it just depends...more than anything - I want to point out that everyone has their own perspective - just because in our culture one thing is acceptable doesn't mean it's the right way or only way for other cultures....which I'm sure you already know/agree with.


FFG - Don't ask me - I have no idea. Sometimes I think we use smiles to help people feel more comfortable.

That attitude would be very odd. I went to a funeral of a friend killed in a car accident at 23 here. It was very, very sad although comforting remembering the good times with that friend (despite his family being of faith...). I can't imagine being upbeat at such a time, but that's just my experience.