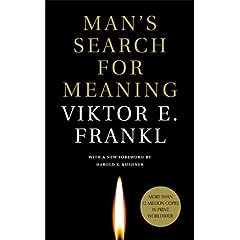 This is a phenomenal story of courage despite all odds. Frankl lost his parents, brother and pregnant wife in concentration camps. Yet he survived and is able to write a stunning defense of the dignity of human beings.

He mentions that the freedom that no one can take away from us - the ability to choose how we will respond and react to a situation. I read this work first in high school. I find even ten years later his concepts of dignity, freedom and kindness resound with me.

He also denounces the idea of collective guilt. At one point, he defends his use of German. One person questioned him - how can you write in German, the language of Hitler? He asked her if she has knives in her kitchen. When she admitted she did, he asked "How can you still use knives after so many killers have used them to stab and murder their victims?" (p. 150)

While there is a great deal of spirituality in this book, I did not feel that one has to be a religious or spiritual person to appreciate it. I didn't feel that a person had to believe in a wrathful God to understand suffering - or to simply attribute all suffering to "God's Will".

Frankl dives head first into these concepts - implying that suffering is part of the human condition - and that we have a choice for how we decide to respond to it. One of the more famous quotes from the book is:

"Our generation is realistic, for we have come to know man as he really is. After all, man is that being who invented the gas chambers of Auschwitz; however he is also that being who entered those gas chambers upright, with the Lord's Prayer or the Shema Yisrael on his lips" (p. 134)

My only disagreement is with the concept of euthanasia. Frankl argues passionately against that - saying that if there is no meaning in suffering, that euthanasia should be allowed. I believe that through some of the medical advances that have been made, that this is an important decision for a person, their family and loved ones. I think a person can believe in life with dignity and disagree with this point - that sometimes it is acceptable to let a person go.
Posted by Aerin at 9:39 AM

that book affected me very strongly as well, though i agree with you on the euthanasia issue. i think that a profound respect for life and humanity and even the value of suffering can still be compatible with the choice of euthanasia. but i understand why one might disagree.

That sounds like a wonderful book. It reminds me of another wonderful book. For Those I've Loved by Martin Gray. There is some contraversy as to whether it should be listed as non-fiction, but I enjoyed the book.

Thanks Chandelle - It's a difficult issue - one that I feel should be up to the families and loved ones if possible...

Thanks FFG - it was wonderful but also profoundly sad and disturbing. He really doesn't go into all the possible horrors of the concentration camp - but even the little that he does are horrifying. The wonderful part - again - is what he chooses to make of that experience - and what he chooses to learn. I'm still a little in awe.