No Way to Live

It can be problematic to put modern values on past societies.  We don't know what influenced their decisions, why they made the choices they did.

I've told this story a handful of times over the past month, so I thought I would share it here.  My feelings about divorce and separation have not really changed over the years.

Some of my ancestors are rumored to not have had a happy marriage.  She would make dinner for him. He would eat at the table, alone, while she would sit on the porch.  Then she would come in and eat. They couldn't bear the company of the other one that much - not even to eat together. 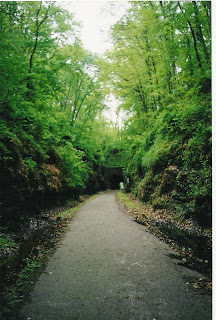 Now, this story is just a rumor, I can't confirm it.  And perhaps there were other reasons for a married couple eating separately - perhaps it wasn't that they couldn't stand one another.

But divorce was a difficult thing back in the 19th century.  In many states, one person had to be at fault.  That's not considering the financial costs of divorce, as well as the social stigma.

Some couples may have decided that the cost of divorce wasn't worth the benefit.

Each person and couple makes their own decisions, what is right for them.  But for me, it seems that there are times when divorce and separation are okay - and even preferred.  Everyone deserves a chance at happiness.  No one should have to live that way; where they hate their spouse so much they can't even be in the same room.
Posted by Aerin at 6:24 AM

For some reason when I read this I was picturing pioneer days, something along the lines of Little House on the Prairie. Perhaps someone had to go sit on the front porch with a shotgun to ward of hostiles while the other person ate ;) I'm joking, of course, but kidding aside, you make a good point, as usual.