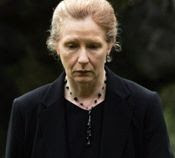 I just finished watching six feet under on dvd. I loved this series. I realized I would like it as soon as I found out the creator also wrote the script for American Beauty. Also, I heard an clip from the first episode - with Nate and David arguing about proper behavior their father's funeral. I was hooked.

Some of the situations are unnecessarily dramatic - if one thinks about what most people would do in the situation - it would not be breaking dishes and screaming, for example. But it makes for good television.

As an aside, the series is sometimes graphic (language, sex, drug use) - it is not something I would watch with little ones around. To be fair, a friend of mine said my affection for the series told her a lot about me. I think it's quite true. I just love the flawed, screwed up characters. They're so much more interesting than, say, June Cleaver.

If you haven't seen it, I don't think it's giving away too much to explain how many issues that Ruth (the matriarch) has. And understandably so - she's spent her whole life serving her grandmother, then husband and young children. Her adult children have trouble communicating with her, and she has a lot of problems communicating with them.

Sometimes scenes with Ruth hit uncomfortably close to home for me. Scenes when it's clear Ruth has unsaid expectations of a relationship/person and then becomes angry and resentful when those expectations aren't met. It's a reoccurring theme throughout the series.

There's a great scene where Ruth feels overwhelmed caring for her mentally ill husband. She fears that he'll never be independent again, that he's simply a weight that she alone has to bear (and there is clearly some martyrdom going on there). Nate, her son, asks if there's anything he can do. She brushes him off, saying there's nothing he could do.

She mentions she has to go to the grocery store. Nate (and George, her second husband) say they could go to the store, if she would give them a list. She acts frustrated, not wanting to give up the control of going to the store herself. It's clear she doesn't want to allow someone else to take responsibility. She does finally grudgingly give them a list.

Another instance - instead of asking her daughter (Claire) to fold her own laundry - she takes the laundry up to Claire's apartment in a huff and dumps the clothes on Claire's sofa. Ruth is often offended and irritable - but refuses to accept help. She wants it to be done her way, she wants to have the control and the responsibility.

Of course, Ruth also does pretty well, handles some things well and grows throughout the series. She's not hopeless or as powerless as she assumes she is.

But on a more base level, she seems to fit textbook codependency. It's the power of the character, so many people find themselves where she is at.

Since I've been reading more about these types of issues, examining my own expectations, confronting people and asking for help - I'm feeling so much less resentful and negative. I (personally) have been able to enjoy time with my family and loved ones, instead of feeling responsible all the time. I check in, trying to figure out what expectations are, and letting outcomes go.

I just felt like posting about this, as it's a little scary to see your behavior (on steroids) and to realize how offensive it could be.

But it's powerful to realize how far I've come, and that I don't have to live that way. I don't have to buy into the cycle of expectations, manipulation and resentment.
Posted by Aerin at 1:41 PM

I love that show too, mainly because the characters make me feel better about my life.

Ruth is a very interesting character. She reminds me A LOT of Steve's mom, who is probably the poster child for Co-dependency. Steve always proudly describes her as loyal, selfless, and caring. I mainly felt sorry for her because she was the daughter of an alcoholic mother. I have always been fascinated in the million different factors that make people what they are. I guess I hope to avoid having my kids end up on a psychologist's couch talking about me.

FFG - they are pretty wacky characters that often sabotage themselves. That's the trick about codependency - sometimes a person can seem loyal and self-less - but at what cost to them? And when resentment and manipulation creep in, it's not terribly healthy (not in terms of your former MIL, just in general). Loyalty is a good thing, but taking care of oneself is very important.

My kids will no doubt end up talking about me on the psychologist's couch. I've already accepted it.

My hope is that I will give them the tools to be as happy and well-adjusted as possible, and not make glaring errors. Also - there is mental illness that runs on both sides, so I want to make sure we're open, aware and honest about it. It was something my husband and I knew when we decided to have kids, and like allergies and possibly needing glasses, just part of their genetic makeup.