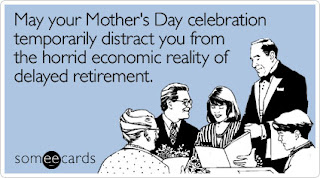 **
A friend of mine asked (on a social networking site) when gay uncle day was going to be.

And rightly so, from my perspective.

In all seriousness, I understand the need for mother and father's day.

But it does seem to ignore all the other influential people in life, in my own life. Who (unfortunately) do not have their own day to be appreciated.

Teachers (and professors) are a great example. I had some of the most amazing teachers growing up. And yes, maybe there is a little brown on my nose, but it's true.

I think fondly of my aunts and uncles over the years, some of whom were also very concerned, caring and challenged me to be a better person.

Now that I think about it, there are too many people to list in one post for me of influences.

It seems short sighted to think that a child's failure or success is solely dependent on their parents. While parents are a huge component, there are so many other people that help along the way.

There is always boss day & teacher appreciation week, but I know what you mean. It really takes a village to raise a child. On the other hand, we tend to take our parents for granted a little more.