Many years ago, a former boss spoke with me about her divorce. They were a liberal couple, put their kids first, tried to be open. She said that despite their best intentions, societal expectations of gender (and other things) just got in the way.

I have many theories and ideas about gender. This is one theory in particular. There is an unspoken prohibition on men and women being friends - especially if one (or both) are in a committed relationship. I am speaking of this strictly from a heterosexual angle - I can't begin to explain GLBT relationships in this theory. Except from the very little that I know, gay/lesbian couples seem to have a much better handle on this dynamic.

For example, I've recently begun carpooling. It's been working really well. We have moved to three days per week! But I find when I explain the carpool arrangement to co-workers and friends, I always have to qualify "he's a friend of my husband's".

Is it because I've known co-workers who were rumored to have had affairs?

This may just be the way I was raised (for active LDS, a married man and single or married woman are not supposed to drive alone with one another. Even a man in his 50s and a widow in her 80s going to church. I'm not joking about this. There could be the appearance of impropriety). Maybe I just live in a conservative state and community (people here routinely assume everyone is Christian).

But as an adult, after college, I've found that the number of male friendships that I've had have dwindled significantly. The blame for this falls squarely on my shoulders. Granted, I've admitted here before that I have a rough time making friends in general.

And as a couple (my husband and I have been together for eleven years now) - often people make friends as couples. I have friends of my own, and he has friends of his own, but that dynamic/undercurrent is still there. It's not that either of us have to "approve" of the other's friends, but it's just politeness that we all get along. I've gone on record that I'm not happy with certain friends who show up to my house drunk (really drunk) who I don't think should be around our kids.

So - how do we fight against these stereotypes? Because I believe this is just another subtle form of sexism. How do we fight about the "When Harry Met Sally" mindset? (For those who don't know, that's the idea that men and women can't be friends without wanting to sleep with one another, and that getting in the way of the friendship). One of the articles I've read/heard of recently is that many couples expect their spouse to be "everything", friend, lover, etc. If we want to create an extensive support network, why can't we (as a society) allow for platonic friendships between men and women? We're discounting 50% of the human race as the potential for support. 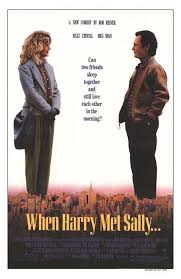 And, for the sake of argument, there are many people who don't run into these stereotypes. Where men and women are friends and no one cares what other people think (if they are actually making any judgments). It may just be my conservative midwestern environment.

This may be generational. I've watched this (for years) with my own parents (at church) and my in laws and their friends. At some point in the gathering, men and women will separate. I can't see my father in law (or Dad) being friends with one of my mom (or mother in law's) friends on their own.

After the incident I wrote about here, my Dad wrote the mother of this person in sympathy - basically a "it's sad that bad things happen, that just being married in the LDS temple doesn't solve all problems". He said she wrote back to agree, and that was that. My Dad specifically said he wouldn't continue writing her, as they were both married to other people. It wouldn't be "proper".

So I'm going to fight against these labels and stereotypes. I'm going to work on this myself. And I'm going to think twice myself before looking at a male/female friendship - attempting the re-think that first gut thought that there might be more there.

PS. there is a great song by They Might Be Giants with this same name. You can buy the cd here
Posted by Aerin at 6:28 AM

I wonder if this perception isn't tied strong to traditional culture (including Mormonism!). At work and in the university environment, I see little of this prohibition. Instead, I see couples working this all out between each other.

It's the approach that Jana and I have decided on, after years of trying limit our friendships to couples or the same gender. We acknowledge that this approach isn't without risk, but we manage the risk through regular communication:

"Jana, just thought I'd let you know that I'm having lunch with [coworker] tomorrow" or, "John, I'm driving up with [Faculty Adviser] to the research conference."

We begin from a position of mutual trust, and are able to enjoy considerable freedom and a range of friendships and professional relationships.

One more thing: when we followed the traditional LDS approach, it aggravated the tension in relationships with the opposite gender, because it infused every one of them with sexual peril. That is relieved significantly when, for example, I can treat my boss as a professional colleague and not as a sexual temptation.

Thanks John for your comments. I agree that regular communication IS the key. And I would also agree that this is tied to traditional culture. The same culture that has a hard time understanding why a married woman would keep her own name, why a mother would choose to work, why a father would choose to stay home.

I wanted to share my experience as something I'm working on. It's nice to know that I'm not the only person who has run into this in the past.