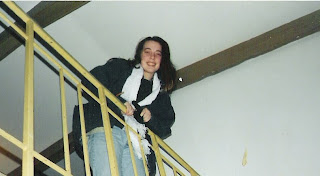 Yes - I've mentioned before that I have this horrible habit of googling people's names. Try it sometime. It's fascinating. One of my sisters, the doctor, tells a funny story that she stopped googling people's names when she found one of her ex-boyfriend's blogs - where he described strange sex acts. Then she googled another ex-boyfriend, to find out he had been killed by a drunk driver.

Well, I have not yet been warned off this practice. Yet.

So last night I found the blogs of two friends, one from high school. He wasn't a good friend at all, but a friend of a friend. We ran in the same circle of friends, if that makes sense. Haven't seen him in over ten years. But there was his blog - complete with flickr photos and everything. Funny how you look at a flickr photo for a minute thinking "I know this person" and then you realize, oh my goodness, that's X!!! Perhaps that's just me.

Then I found the blog of another friend. He eschews the weblog format (even has that in his description) and doesn't talk (too much) about personal goings-on. What I find fascinating is just how political his blog is. I don't remember him being all that political. Things change in ten years, I suppose.

Yes, there are reasons I'm not linking to either blog - again - it's my very boring privacy hangup. I was discussing this blog with my husband the other day. He said, "Well, I could google your name and find your blog." I replied - "No, you couldn't. Thank you very much. You couldn't find it. You wanna bet?"

I have this absurd pride in that. Other people can blog with their real names and post real photos and that's ok. I choose not to, for various reasons. Including some odd ex-boyfriends (although none as scary as chansons but other people I just don't want to share my thoughts with. Also - I have some thoughts I'd rather not share with my co-workers and some IRL friends. So.

So now I'm curious if there are other friends who have blogs - some who also have my privacy hangup or not. We'll see. It's a strange road to tread. Also to determine what someone will share online and what they won't.

Have you had any odd discoveries googling people's names? Have you found any odd blogs of former friends/coworkers?
Posted by Aerin at 8:32 AM

Thanks FFG! It's been interesting. It's also interesting to discover what someone will and will not mention - and where people have ended up in their lives.

I was thinking about this again, so I googled my name. I haven't done that in a while & thankfully it doesn't link to my blog. I rarely use my first name & never my last name even though there are plenty of pictures as well as my husband & children’s first names.

Also--you are right about what people will & will not mention on their blogs. Like a book, you feel like you get to know people when reading blogs, but you only see what they share. My husband gave the link to mine to several of his aunts and his cousins read it, so I avoid topics that involve his short comings. I also have friends that are good Mormons that aren't happy about little jabs against the Church in such a public way. I have thought about doing an anonymous blog, but I have a blog for each kid & that takes enough time. Funny thing is I started the kid blogs so family & some friends wouldn't read my main one, but word travels & they got curious.

Floating in the Milk said...

I've got a family blog that's pretty open with our names, etc. But my personal blog doesn't have any links to my real life name or info that I know of.

I google people also - I've found blogs, newspaper articles and bulletin board postings that are really interesting. I guess it's sort of snoopy, but I'm a very snoopy person by nature, so I'm not really ashamed of it.

Thanks FFG - That can be a lot to keep up with! Especially with your new job! (btw - I had commented twice, that's the comment that was deleted. grrr blogger).

Thanks FITM! Yup - that's where I am as well. I'm very curious - and you know what they say about curiosity...