My public high school was amazing. I can still get a reaction of disbelief when I talk about the gym (physical education) program. As juniors and seniors, we could "elect" different sports or activities we wanted to participate in for a semester. One round involved rock climbing and weight lifting. Another involved cross country skiing, volleyball and yoga. I am not making this up. It's without question that we were very privileged. When I hear about how much my dad still pays in property taxes, I think I have an understanding of why.

I really enjoyed yoga. I was actually pretty good at it - being naturally flexible. (One of the many sets of genes I lucked out in getting). Over the years, I've watched various yoga videos - but haven't joined a class. Usually because of the cost (although limited) involved. After the twins were born, yoga videos were pretty much out of the question. Every time I tried to do something as simple as situps - my son or daughter (or both) would want to sit on my stomach. They are very distracting.

So when we joined a gym a few months ago, I saw they were offering a pilates course. I own a thirty minute beginner pilates dvd, so I thought I could swing it. I must say, the hour long pilates class was much more challenging than I had thought. Maybe it was all the other class participants who easily (almost effortlessly) can keep themselves in the plank position for thirty seconds. If you haven't tried the plank position yourself, it may look simple but it's actually quite difficult to maintain. 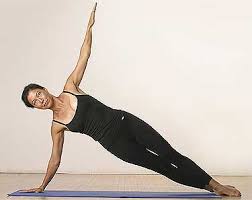 The instructor is quite nice although a little perky. One day she mentioned that she works for the public schools - and it does seem like she would make a great teacher. And perkiness is not necessarily a bad characteristic - especially when you realize that you will need to do two sets of rotating obliques. Rotating obliques probably won't mean anything to you unless you've done pilates, but trust me, it's not easy.

After the first week, I was sore in muscles I didn't think I had. I wasn't able to hold the poses as long as I'd like. With each week, it gets a little easier. I can hold plank and the teaser poses longer. So I think that means I'm getting stronger. The jury is still out if I'm actually getting a workout or not.
Posted by Aerin at 6:30 AM

Pilates has a great reputation for making your stomach muscles really tone. Right now, I am just looking to get rid of the bump. Perhaps, in a few months…

Thanks FFG. Not seeing that tone yet but I think I will. You will have a new one in your arms before you know it and be able to start toning again too!