I was going to e-mail my friend NN about this film but I thought - why not recommend it to everyone?  She has a great post about cave art here. 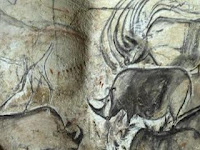 I watched this documentary film recently.  Some parts were choppy and it may have been longer than it needed to be.  Maybe it would have seemed less choppy if I had seen it in 3D.

But the cave art was amazing.  The notion that people 30,000 years ago had the time and wherewithal to paint animals on this cave - on any cave is inspiring.  I suspect there is something about being human that inspires us to create art - to leave a legacy for our descendants.  There is an urge towards communication - to find common understanding.


Anyway, I explained that cave people were probably not stupid.  No one had made a spear before, but they had to figure it out.  And use that spear to find food.  They had to figure out what could be eaten - how to stay warm through the winter.  That would have taken a great deal of intelligence.  In the film, an anthropologist throws a spear replica.  I'm grateful that I am not dependent on bone tools for food!

Upon further reflection, I remarked that their brains were probably smaller than our more modern brains.  So they may have been a bit less intelligent.

But my awe still stands. It's amazing that our species survived and has reached the point we have where we aren't forced to hunt and gather for food.  It's amazing that we are almost completely separated from seasonal impact - from the winter and summer.
Posted by Aerin at 6:00 PM

Thanks for the shout out :) I share your amazement at the cave dwellers and all they accomplished, how far we've come!