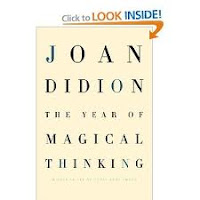 I took an age-related medical test recently.  It was one of those tests that the medical community suggests that you take when you reach a certain keystone age.

Fortunately, money is not a concern about the test (I have insurance; not great insurance but insurance).

But I realized that I was uncomfortable about scheduling the test because of what it meant.  It means that I have reached the age where I have to schedule some age related tests.

I wonder if that's part of the reason people shy away from getting such tests done.  Some people have philosophical issues about some medical testing (which I can understand and respect).  But rather I wonder if some of us are uncomfortable because of what that means about aging.  Some of us (myself included) would much rather be in denial that we're getting older, and that something will one day kill us.

I also finished The Year of Magical Thinking by Joan Didion.  It was an interesting book; her ability with language is amazing.  In it, her husband collapses and dies of a massive heart attack at dinner.

During one part of the book, she thinks back to what she knew, if she could have prevented him from dying. She remembers that he had a test in the 1980s.  One of his veins/arteries was clogged - the doctor said that it was something to watch. He said a nickname among doctors for that artery was "the widowmaker".  Didion's husband, John, wondered if it would one day kill him.  Joan responded that no one knows when their death will be, and in what form.  Yet that was exactly what happened, fifteen, twenty years later.

Sometimes, do we want to assume that we are different and unique? That whatever is hurting or harming someone else, won't harm us.  It's a teenager point of view that never really goes away.
Posted by Aerin at 7:00 AM

It is funny when people in their 80s & 90s still say they feel young on the inside.

I think some of those age related tests seem to cross over into uncomfortable boundaries – like colonoscopies or mammograms. Besides the hassle of going to the doctor, I would like to avoid that much physical exposure. After having a baby or two, you would think that desire for privacy would disappear forever. Perhaps it has a little.

However, it is better to be safe than sorry though. Good for you for doing it & setting an example (or at least making me think about it).