Not so far from reality 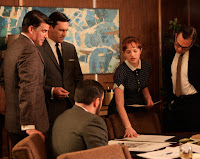 I've been watching Mad Men - I just finished Season 2 on a streaming movie/tv service.  One feminist website I read (the hathor legacy) claims that although the show attempts to paint the misogyny as in the past, it's still smacks of misogyny and priveldge.

I agree that the writers/producers are having fun with the smoke filled pregnancies and Scotch filled offices.

What strikes me, however, is that while a lot has changed in fifty years, some things haven't changed.

Years ago, I heard an interview with the creators of Arrested Development *.  That show is extreme, the relationships are bizarre, dysfunctional on steroids.  Yet the creators said they made it that way on purpose, as many families are really sort of similar.  They're just not that bad.  There's a part of humor that hits close to home - that's why it's funny.

So while many people see obvious parts of Mad Men that are no longer true, the office smoking, the admonishment by everyone (men and women) to wear shorter skirts - some of it is still around, here in 2011.  I was harassed at one of my first jobs - a fast food place.  Was my boss hitting on me (he was only five years older).  Was it inappropriate?  Yes.  Did he feel entitled?  Why?

And I have been in workplace situations (like Peggy) while I was the only woman at the table - and expected to take notes.  When everyone looks to Peggy to turn on the projector - it rang surprisingly true.  Obviously, this doesn't happen in every situation.  Could I have refused?  Yes.  Could I have even spoken up and pointed out that there was an assumption there - that I would take notes because I'm female?  Yes.  Or maybe the assumption had nothing to do with the fact that I'm a woman.  Yet, I think some things are subconscious.

The culture has changed outwardly.  I don't have to wear heels and a skirt to the office.  Co-workers won't tell me "they like the view".  I've had multiple female bosses.  My husband was a stay at home Dad.

But there is an undercurrent that still rings true and is still around.  Some cultural and political assumptions still impact us.  They're just not as obvious any longer.

* I thought that was the link to the interview, but apparently not.  My google abilities are not working for me today - but I'm pretty sure that's the interview I remember. Unless I was dreaming it.
Posted by Aerin at 4:18 PM

I have never watched the show. I'll be returning to an office environment soon, maybe I should watch to remind myself what the real world is like....