Back in the early 90s, there was a resurgence of 60s fashion.  It was a type of new hippie culture (because everything comes back in again eventually).  It was related to grunge, but distinctly different.  It involved lots of patchouli, some lava lamps, long flowy skirts, beads, etc.

Much to the chagrin (amusement??) of most of my friends (now), I was part of this movement back in the day.  My then boyfriend and I waited in line outside a cd/record shop for tickets to a Grateful Dead show.  This was back when all members of the Grateful Dead were still alive (to show my age).  I confess, I'm not sure that I was such a fan of the Grateful Dead, but he was.  And we were attached at the hip back in the day - so naturally we would go together.  There were (are) some songs I liked, and I did like some of the calico type fabrics and tie dye.

For the record, all of this was stone cold sober.

(I remember a conversation about Deadheads with him, about how the "true" fans weren't about the drinking or drugs. What can I say, I was young - and the culture was pretty far from mormon culture - even, arguably, the antithesis of mormon culture).

He and I used to hang out at a great little local shop.  They sold (and made) beads. They sold lava lamps, essential oils and Grateful Dead/Phish stickers.  Bumper stickers with roses, skeltons, etc.  It was run by two women, friends,moms - who had been big Deadheads from the 60s. 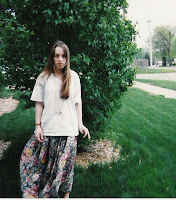 (This is a photo of me from the time.  I look so angry because I was, because it's in front of my parents' church, which I had been forced to go to and was not happy about.  Who's idea was it to take a photo there anyway?  But this is the type of thing I used to wear.  And I'm no longer so angry as I was then.  Is anyone??)

The point of this post is not a trip down memory lane.

Now, in the town I live in, gift shops don't stay open all hours of the night (as they do in other, more populated parts of the midwest).  I had a specific idea of the kind of gift I wanted - it was a theme gift.  I wanted some sort of pin or charm with a book on it or a steaming cup of coffee/tea.  Shouldn't be so difficult to find, right?

Needless to say, some of the shops (like the one I described above) are still around. They've changed, they have new merchandise, but they are similar. Although the new hippie movement sort of died, some parts of the culture are still around, and going strong.  And I thought - maybe - maybe they might have a pin or charm there, right?

So back to this evening, I'm still wearing my business casual (i.e. work) clothes.  Not even really fashionable work clothes, because I'm a mom, and work in a conservative industry.  And being on the cutting edge of fashion just isn't me.

And I don't wear tie dye shirts and long flowy skirts to work.  Most of the time.

What was amusing (to me) is that as soon as I stepped in this particular store, looking for a pin - I could tell I was out of place.  One of the salespeople came up to me almost immediately, asking if he could help me find something.  I think the idea that I would be there, browsing...well - I'm assuming that most of their customers don't look or dress like me.

It was just really amusing to me - considering my above "hippie" credentials.  I should have broken out my old tie dye shirt (I still have one) just for the occasion.

PS.  Hippie Chick post title stolen from an early 90s song by Soho.
Posted by Aerin at 7:50 AM