Eventful visit to the Dentist

At the dentist yesterday, I was sitting in the waiting room when a lady around the age of 70 was walking out.  She was walking slowly and at first, appeared to have problems opening the door to the waiting room.  Then, she just stopped and stared straight ahead.  The nurse ran over and caught her before she collapsed; she dropped her purse.

A chair was brought, and questions were asked.  I have been working (very hard) on my "Mind your own business" way of life but in such situations, sometimes it's difficult.  Anyway, I overheard the nurses (and assistants) and the dentist asked her about blood sugar, etc.

I'm sure she was embarrassed and uncomfortable about all the attention she was getting.

But in the end, no ambulance was called.  A nurse walked her to the car and she drove away.

So this situation seems wrong (and frightening) to me on two levels. First of all, if you are not able to respond to direct questions and almost collapse, it seems to me that you probably do need to have an ambulance check you out.  Maybe it was just blood sugar.  But maybe not. I am dismayed that for whatever reason, (perhaps money), that this woman didn't feel an ambulance was necessary.

What was going on (to my very amateur view) was a possible mini-stroke.  That's not something to take lightly.

Then, I'm dismayed that after such an incident, she was capable of driving a vehicle.  I am all for people having independence, and as I've mentioned before, my city is not so good on the public transportation front.  But I feel behind the wheel of a car, she may be a danger to herself and others.

So, I understand the railing against a "nanny state".  But there is a point where a person's behavior and choices do impact others around them.  My parked car was totaled around ten years ago by someone who suffered from altzheimers. After he hit my car, he didn't even realize he had hit another vehicle.  He slowly turned around to drive home.  When questioned by police, he didn't know why there was paint on the front of his car, or a cut on his forehead.  Fortunately, he still had insurance (!!?!).  But he should not have been behind the wheel of a car.

I hope she got home safely, and I hope that it was just a momentary lapse.  I do think we need to discuss these types of things as a society.  I'm all for personal independence, but not at the expense of everyone's safety. 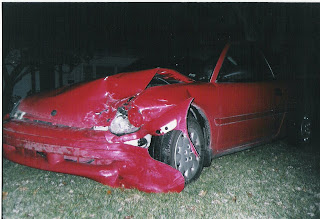 Bonus! No one freak out, this is just a picture I took after the accident some years ago.

If you've yet to join the conversation re X-Mormon of the Year over at Main Street Plaza, this here is your official invite! ( And all apologies for this spamalicious OT comment ! )

I can't believe they just let her go. Even though they SHOULD have stopped her out of concern, they certainly should have for their liability. Crazy!