A good friend of mine explained this concept to me a few months ago. I had never heard of it defined or labeled before. But I understood the behavior all too well. Here is the definition on wikipedia.

I come from a long line of people who are skilled at this game (no offense to anyone who may be reading this blog..). 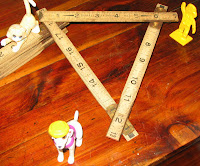 **
You complain, kvetch or gossip with the third person, knowing full well that third person will tell the original person you have a problem with.

The third person gets to do your job for you. They get to decide what to tell, what not to tell, how to "spin" it so that a desired outcome is met.

My, it makes life a lot easier! I don't have to ask my siblings (for example) for anything! I don't have to say "would you be willing to do x" or say "I would feel more comfortable not exchanging gifts" or whatever. You can tell a third person, another sibling or a parent - and trust that *they* will relay the message.

Not only that, but it gives weight to any opinion that I have. Instead of just being me, aerin, my humble opinion and perspective, now I can say "well, mom agrees with me." or "one of my siblings agrees with me, so I'm right". And if that person has passed along a message, it's implying that they agree with it.

It has been so freeing for me to start addressing issues with the people themselves in my life. And refusing to let other people put me in the middle.

Because I genuinely thought I was responsible to keep up all this communication - this structure of "he said, she said". To soften the blows of shame or blame from someone else, but still communicating a part of that message. "Why don't you talk with this person? Why won't you come to this gathering? This person's feelings are hurt."

I thought if I didn't say it, it wouldn't be said - and the two people in my life would never know how the other person felt.

I love the fact that it's not my job or responsibility. If two people don't want to directly communicate - that's not my problem. I can maintain individual relationships without being the "heavy" or the enforcer of the status quo.

How this all relates to mormonism? Well, I believe mormon culture is one of the skilled players at this triangulation shell game. From other members running to tell the bishop ("I heard so and so drank diet coke the other day") to being told that *you* were responsible for your family's salvation. If they left mormonism, it was *your* fault.

You had been told a message, by God or the bishop or both - and you needed to communicate that message to everyone.

Not only that, but it was your responsibility to enforce or punish God's (righteous) judgment. That was your sacred responsibility as a home or visiting teacher, teaching children or as a priesthood leader. You get to tell everyone else what "God's" plan is for them.

Of course, not all mormons buy into this culture. Many see it for the unhealthy pattern that it is, and will only try to control themselves, not other people. They are able to live and let live.

It does make people really uncomfortable to be called out of this pattern, if they are someone like me who learned this as interaction 101.

What it forces a person to do is to talk/address something with the other people in their lives, or let it go. Stop the gossiping or manipulation.

For me personally, I feel it has strengthened so many of my relationships. Particularly with the people that I used to use to triangulate with (I asked them how someone else, a third person we were both close to, was feeling, what they were thinking, etc.) When I stopped doing that, I had to find other things to talk about (instead of other people). I'm working at communicating my own beliefs instead of other people's.

**this ruler is an antique we got from my husband's grandfather - standard, of course.  And yes, that is a candy land figurine in one of the corners.
Posted by Aerin at 12:21 PM

A friend of mine sent a link recently to a funny blog post about how a prominent form of church gossip comes in the form of prayer requests for other people. I had not really thought about it before, but that's so true. And definitely a form of triangulation.

Interesting comment Kathryn. I think some prayer requests are okay - at least if it's "someone is suffering from cancer and could use your good thoughts" type of thing. But someone has strayed from the right path - that's another story...what do you think? Is triangulation always unhealthy?