My father in law loves rhubarb. If you haven't had rhubarb before, it looks like celery, but tastes very tangy and a little sweet. *

We have two rhubarb plants in our garden. This year, due to all the rain) the rhubarb is thriving and has stayed alive longer than usual (usually rhubarb is done around July). 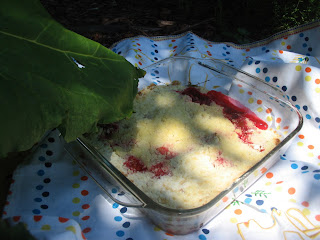 This is one of the recipes I found from an Mennonite cookbook. A Wooden Spoon Baking Memoir by Marilyn Moore

1. Pre-heat oven to 375 degrees F
2. Prepare crumb crust mixing flour and sugar. (I recommend using a Cuisinart if you have one.) Cut in butter.
3. Place one half of the crumb crust in an 8 x 8 x 2 baking dish. Pat into an even layer.
4. Prepare filling. Spread rhubarb slices over crumb layer. Sprinkle gelatin powder over rhubarb.
5. Sprinkle remaining crumb crust evenly.
6. Bake 45 minutes or until crust is brown and filling is bubbly. Cool.

*PS. You can eat rhubarb raw but I don't recommend it. It tastes much better baked in pies, crisps and in jam or jelly.
Posted by Aerin at 7:21 AM

rob, who is all kinds of stubborn, says "i won't eat anything that looks like celery and tastes like an apple." despite the fact that rhubarb is a plant and wasn't created in a lab somewhere, he thinks that this look/taste combo is somehow against the natural order. his loss--i love rhubarb!

My mom used to make rhubarb pie. I think mainly because it reminds her of her mother.

I agree carrie - his loss!

FFG - I think that sometimes it's about family traditions as well. I've had good rhubarb pie and not so good, there is a knack.