We're more than our Biology

So I heard this radiolab program the other day. It was fascinating, to me, since I had thought about donating my eggs at some point. I had also thought that a child from an anonymous sperm donor would not necessarily go looking for their biological father.

If you're not able to listen to it (some spoilers), it's about a young woman who finds out that she was conceived through IVF - and that her biological father was a sperm donor. She only knows one fact about him, that he attended a medical school around 1982. She enlists some friends and family members - and eventually ends up writing to all 600 of the medical students that could have been potential fathers.

Whatever I may think of her quest, I can understand the need we all have to find out where we came from. What diseases we may be predisposed to. Whose nose, or eyes or curly hair we have. On the other hand, I hate to think that a person was condemned to unhappiness by not knowing this information. At some point, from my perspective, we have to accept that we know as much as we are going to know.

And I believe, strongly, that we are not condemned by our biology. There is something (from my perspective) that each of us has - that makes us more than our DNA. (Yeah, I know this is strangely related to a sci - fi movie from 1997...) 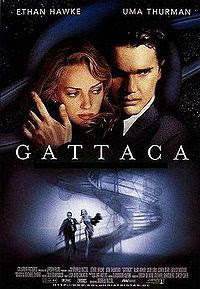 I watched an interesting short about identical twins the other day - where even two babies with the exact same genes can end up with differences. A friend of mine has identical twin boys, and one has glasses he has to wear.

I can't deny that biology is an important component. But it's not the only component.
Posted by Aerin at 2:05 PM

1) That's one of my favorite movies.

2) I was adopted, and people are always really interested in how DISinterested I am in my bio-parents. I've never tried to find them (and it wouldn't be hard), and I don't really care to. Maybe someday I'll want to - that thing you wrote about whose nose and curly hair you have? YES. It would be kind of cool to know people who actually look like me (unless they're all way better looking, in which case NO THANK YOU). But it's just not a huge deal. No family is perfect, and I'm not naive enough to think that there's something magical about biology that creates the "best" kind of family.

On the other hand, I think an adopted kid with lots of non-adopted siblings (ahem, ME) is a great study in how much more genetics really play a role than we may sometimes think. Like sense of humor. Mine - pretty different from everyone else in my family. I have never found farting particularly humorous.

Thanks Rebecca for sharing - and I have definitely heard that sentiment shared before by other adoptees (children who were adopted).

I'm not sure if it's a favorite movie of mine - but it definitely brought up lots of good questions. Questions that need to be discussed as a society. I find in the past 10 years (since the movie came out) - we haven't discussed those issues (testing, profiling) as much as we should.