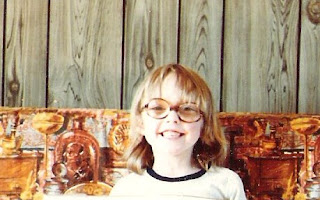 I got glasses when I was around 3. It must have been a big deal for my parents, my dad had just finished graduate school. But we went to an optometrist anyway. I remember looking in some sort of machine that had horses and apples. It turned out I had strabismus. I had to wear an eye patch for around a year. For a little girl, an eye patch is not as easy to promote wearing (little girls aren't usually considered pirates, at least they weren't back then). But I wore my glasses and my eye patch, and I don't have any lasting effects.

We've been taking my son (noggin) and daughter (goose) to the eye doctor since they were around 3 months old. Their tear ducts were clogged. They grew out of that, but the optometrist was able to find their prescription even at that age. They were both far sighted - but my daughter's far sightedness has corrected itself (also common according to the doctor).

We've returned each year because of their genetic history. Both parents, four out of four of their grandparents wear glasses, and three of their aunts and uncles wear some sort of vision correction.

This last time, noggin was diagnosed as needing to wear glasses. He doesn't have to wear an eye patch yet. He is doing wonderfully with the glasses. He has received lots of compliments. And he's taking good care of his glasses so far.

Here is a photo of both pairs of glasses - his and mine. 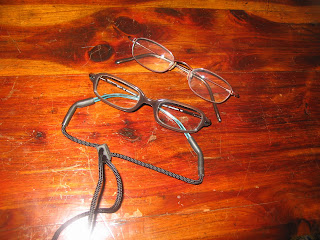 I remember I was about this age and my glasses were dirty. I was walking outside of church. I remember I took my glasses off, rubbed them in the grass, and then tried to dry them on the cement. It made logical sense to me at the time - the sidewalk cement was dry. Needless to say, I was disappointed when I put on my glasses afterwards and they were scratched.
Posted by Aerin at 7:26 AM

Heh. I tried to buff my glasses at the silver shop when I was 14 to get the scratches out. It did not work. Oops.

I still miss the glasses I got when I was visiting you years ago. I wore them for about three years, and then they snapped.

It is difficult to get kids to take care of them the right way. Almost all of my family members have glasses too. My son had an eye test last week & they discovered his left eye has a slight astigmatism. I have the same thing. Why did we share those things with our sons? :)

There is nothing cuter than a kid in glasses.

(PS - I found your blog from Main St. Plaza, just so you know)

Thanks Laura - you'll just have to come back to visit sometime soon to find another pair.

rebecca - thanks! I think he looks pretty cute myself, but I'll admit to being biased.