My Dad vs. My Father in law

Both are phenomenal people. They both work exceptionally hard for their families (and continue to work hard for their adult children). They have sacrificed a great deal. They are both men of faith who take their religious beliefs very seriously. They're both great with kids - flying in the face of stereotypes about fathers.

But they do have their differences. My father in law is a lawyer. He is very good at what he does. He thinks on his feet. He believes strongly in having a well-thought out argument and positions. He is great at buying cars and haggling with car salespeople. He is good with people in general (you don't realize what he's doing, but he's flawlessly working a room). He and I disagree about some things, like the concept of joint custody, but for the most part, I can respect his opinions and where he is coming from. He is not good at fixing things.

My Dad is first and foremost an engineer. He is also very good at what he does - he has had various engineering careers over the years. He's not necessarily good at managing people or understanding what motivates them. He's a quick learner and an amazing problem solver. My Dad is not a quick thinker or good at confrontation (which is why he's not a lawyer!) He and I disagree strongly about some things, including religion and religious dictates. With some things, I don't understand how he can believe them, but I can accept that.

Our wagon has been broken for months, since last Fall. One of the straps was no longer attached. It was one of those annoying things that busy parents (like myself) just work around. We tried a couple of easy solutions (glue), but none of them worked. I would put my daughter (goose) on the one side with the broken strap, as she was much less likely to climb out of the wagon in transit.

Last weekend I was visiting my parents. My Dad took the kids for a walk around the block in the wagon. When he got back, he had lit the grill, but he also mentioned the broken strap to me. Within a matter of minutes, he had rigged up something that fixed the wagon for us. He (of course) had all the tools and parts in his garage. 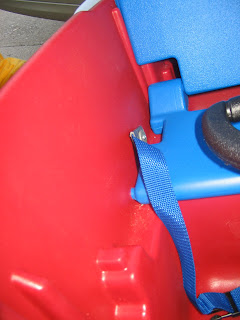 Each person has strengths and weaknesses. There have been moments over the years when I've felt like my Dad and my Father in law were in competition with one another. It simply flabbergasts me.

They are such different people and have such different skill sets. It's a little like me trying to compete with a skilled politician, a plumber or an olympic swimmer. I'm none of those things, and they're not where my talents lie. To compare with cars, it would be like trying to drive (and park) a large truck in the city - or attempting to move using a motorcycle.

For the most part, I try to sit back and not put them into positions where they compete. It's simply a strange position to be in - caring about both of them, with what I know about both of them and their talents.
Posted by Aerin at 7:08 PM

My great grandmother is said to have stated that there are three kinds of husbands, or three qualities: a great lover, a great conversationalist, and a great fixer of things. She said you could only ever get two of the three, at most, in any one person. I guess since she was married three times (well, four actually, but two were to the same person) she must have known. Anyway, your post made me think of it, although obviously the qualities you can get in a father or father in law are somewhat different.

Thanks Laura! I find I disagree with your great grandmother and her analysis. Although with three husbands/ four marriages, she was probably onto something.

But her understanding of people's differences is accurate - most people have a handful of talents/qualities, and things they aren't so good at as well.

Funny, but when it comes to work my dad was more like your FIL while my husband & FIL are more like your dad. Although both are nice, it is great having guys who can fix things. :)

FFG - that's what's odd about it. My FIL can actually fix things, it's just a much longer process involving trips to hardware stores and much swearing. And my Dad can make conversation and be social, but he's not good at it (it's not second nature to him).

And I think that's what I'm saying, we each have something that is just second nature to us, we do it without thinking.