When my friend Lily (her derby name) first mentioned she was joining roller derby, I was skeptical. I associated roller derby with some of the fake bouts of the 70s (reminiscent of professional women's wresting - a.k.a. GLOW). Was it really strong? Was it more exploitative? Who knows.

So I was pleasantly surprised to meet many of the women from the local roller derby team and attend their first bout. These women are amateur athletes, but in very good shape. Every practice begins with 500 crunches, for example.

Which makes sense, since the roller derby bouts consist of 3 periods of 20 minutes of skating. Skating and running into one another, falling down, quickly getting up and skating again. Considering the shape I'm in currently, I would probably be able to skate for 5 minutes before collapsing.

So it's very real. Within their first season, one team member needed shoulder surgery. Another team member, Strawberry Jam, broke her leg in practice and needed surgery (she's still in a wheelchair/on crutches).

Perhaps it's their costumes, which typically entail short skirts, lots of makeup and fishnet stockings. There is a definite derby "persona" that all the women develop.

I have a great deal of respect for these women. I feel they are very strong. They are obviously well-conditioned athletes. I spoke with someone who mentioned they felt the
costumes/kitsch detracted from the athleticism. While that may be true, I think it's just fun - everyone is out there larger than life, having a good time. 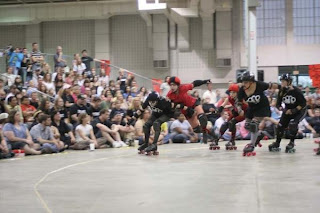 Lily during a bout

What impresses me the most about the bouts so far is the diversity of people who have been attending. There are the people with mohawks and tattoos. There are parents and
grandparents - as well as young/very young kids. The fans are not all women or men.
The only thing that could be more diverse would be to have more people of color.

One ten year old little girl would put her hands on her hips to call off the jam.

I look forward to next year's season.

One commentators impression of the last Roller Derby bout - video
Posted by Aerin at 7:05 AM

Sounds interesting to me. I've seen them on ESPN. It even looks kind of fun, but I could never do 500 crunches.

Great post Aerin, skating is hard enough then to throw in getting hit and slammed all over the place, whew that tough business.

FFG - I think they definitely have fun, and I would seriously consider joining if I were around 23 and didn't have kids! Chasing after two toddlers on crutches is not something I'm interested in.