Out of my comfort zone

I had a very surreal experience a few weeks ago.

My co-workers' wife was having a baby, so we had a baby shower. This particular co-worker though is from India, and he and his wife have newly immigrated.

It was someone's idea - the organizer of the baby shower in fact - to give it an "Indian" feel. Typically baby/wedding showers at my work involve cake. Maybe some streamers in the break room. That's it. Sometimes the cake is blue or pink depending on what the gender of the baby will be. No need for anyone to feel remotely out of their comfort zone.

Another woman (also originally from India) agreed to host the shower. As soon as she sent out the explanation email with all the different ceremonies (including some blessings for the couple) I immediately clammed up. I knew I would be up for whatever (I usually am) but the people whom I work with might not be.

(To further explain - this is the same group of people who were okay with having a quote about christ purifying us with his blood on their dry erase board and who got huffy when someone suggested that sometimes sour cream and chives are good in mashed potatoes. Mashed potatoes are supposed to have four ingredients only. Milk, butter, salt and potatoes.)

So most everyone who attended in this conservative midwestern workplace did really well. Despite one part of the ceremony where we "blessed" the couple.

Most of the group wore the tilak, a dot on the women's foreheads and some red dye on the men's foreheads. The men I work with actually put the red dye in between their eyebrows. I was impressed.

On the tolerance level, I think give my midwestern workplace a B+.

I'm holding a lamp for arti in this photo - it's a ritual to ward off the evil eye - to ensure safe delivery. 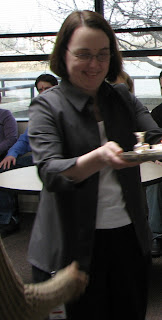 I have many other issues with this event - which is probably clear from the look on my face (I have never claimed to have a poker face).

In reality, I think everyone would have been much more comfortable if my co-worker just brought in his wife and we all had cake.

Because in reality, what does it mean to ask someone to bless another person - if you don't really have any understanding or belief in the spirituality of the ritual? And if this were among a group of my friends, it would be one thing. But this is taking place at my workplace - while on break - still during the work day.

It felt a little like all of us attending a christening, mormon baptism or brit milah. On one level, it felt like the planner was trying to reach out and expand our horizons. On another level, it felt like we were assuming everyone agreed with or supported the spiritual nature of the ritual. I'm not an atheist activist by any means, but I become very uncomfortable when religion is mixed with work.

I was also uncomfortable that another co-worker was asked to host the ceremony and to give it a more Indian feel. Because, being of Indian descent, she would naturally know the most about it. And she did it flawlessly. It just felt wrong to me somehow - wrong in some way I can't really vocalize.

It would be the same as if I was asked to host a mormon baptism reception or something. I could probably wing it, and ask for assistance from my parents or other people who attend them reguarily - but those kinds of assumptions in the workplace can be uncomfortable. It's like singling out the only person of color in a classroom to get the african american or hispanic perspective - as if they could speak for everyone of their race. And at what point are we honoring someone else's background or culture, and at what point are we mocking where they come from?

Finally - and I know this is what all you former mormons were waiting for, I was uncomfortable because I'm uncomfortable with most public religious rituals period. I don't like the idea of some sort of sacred ceremony that I don't understand. Perhaps I could make more of an effort to understand the ceremonies before I find myself immersed in them.

I participated in baptisms for the dead in the mormon temple while I was a teenager. I still have no idea why I had to wear little covers over my shoes. Or why I had to wear all white - including my underwear. I still don't know. And whomever I asked would also say they didn't know, but that was the way it was to be reverent. So any ceremony/ritual being led by someone else that I'm not really familiar with, I'm bound to be uncomfortable. That goes for anything anymore - funerals, weddings - even the strange blessing of the new water bottling factory (I'm not making this up) when I was in Russia. It involved brooms and water - at some point when my scanner is fixed I'll post the photo. It was decidedly odd.

Needless to say, I'm not suggesting that these ceremonies are wrong or bad or have no purpose. Thye obviously do have a purpose and are usually very special for the participants. They just make me nervous and uncomfortable.

in general, I'm someone who has a very specific comfort zone. I don't leave my comfort zone often now that I've become so domestic. It does feel good to try new things every once in awhile - maybe just to remind me why I set the limits I do.
Posted by Aerin at 6:20 PM

True it's kind of odd to have something like that at work.

Outside of the office though, it can be kind of interesting to see customs of unfamiliar cultures. When I was working in New Jersey and had a bunch of colleagues from India, I used to like to ask them what regions of India they're each from, and how the customs in the various regions differ from one another. They took me out to a Hindi movie one Saturday (which was a lot of fun) and (at my request) they took me to a Divali service at a Hindu house of worship, which I also found fascinating...

Your experience reminds me of that sitcom, the Office. They are always forcing people to be uncomfortable. It probably has more to do with those around you & the setting rather than the ritual.

I love experiencing rituals and customs of other cultures. It is the familiar Christian ones that seem bizarrely uncomfortable for me. Perhaps, I feel like it is being forced rather than shared.

chanson - I agree. I do appreciate experiencing other religious services (sometimes) and other traditions. I think for me it was a mixing work with friendship/religion thing - it was just awkward. The strange part about this ceremony is the person who led it was from northern India, while the couple is from southern India. I think the traditions met somewhat - but there are differences.

FFG - I find the office and office space hysterical. Sometimes they hit a little too close to home. That and dilbert.

Sounds like it was an experience with fun and discomfiture for all! I would have liked to have seen it.

On another note you brought up, that's an interesting regional mismatch! Northern and southern regions of countries have a tendency to be *very* distinct from , and often culturally antipathetic toward, each other. I am brought to imagine all the possible gaffes in a conservative American southerner in India being asked to host an "American-style" baby shower, including appropriate rituals of "American religion," for an urbanite from Los Angeles or Detroit.

Now that would be fun to watch as a fly on the wall.